OddsandNews is a Sports Content Website offering Sports Information in all sports such as scores, live odds, sports news, sports events and more.

Nick Pileggi, talented author/screen writer is one of my favorite people. On the square, hard working, and a man of his word. When Nick set out to write his book "Casino" he interviewed hundreds of people, reviewed court proceedings, transcripts, television news footage and such. Most of the information he published is right on target. However, all books are flawed, including the original Testament.

While Director Extraordinaire Martin Scorcese was on target with the visual representation of "Las Vegas" during that era, many scenes from the movie version do capture a relative degree of accuracy, while others should be categorized under dramatic license. My two top level Casino Executives, Marty Jacobs and Murray Ehrenberg were consultants to Universal Pictures and played an integral role in the development of factual content included in the film. Bob De Niro, a stellar artist and actor's actor, insisted that his entire wardrobe come from the same manufacturers that I dealt with to maintain the utmost in realism of how it was. As with all films fact or fiction, there is a certain amount of "Hollywood" that takes place. One prime example is, I DID NOT JUGGLE on my television show! While some of the timelines are askew, and events portrayed in the film were written for "The Big Screen", the film "Casino" gives it's audience a fact based snapshot of events and people behind the scenes from the "Good Old Days" in Las Vegas. 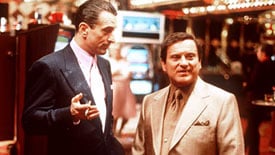 From The LA Times

Love & Honor in Las Vegas. The stunning National Bestseller from the New York Times. The character name was fictional, but the man wasn't. Award wining Author Nicholas Pileggi, based him on real-life gangster Frank "Lefty" Rosenthal, who ran the Stardust, Fremont, Hacienda and Marina casinos through the 1970s and into the mid '80s.

All Rights Reserved | Powered by ISPPRO.NET